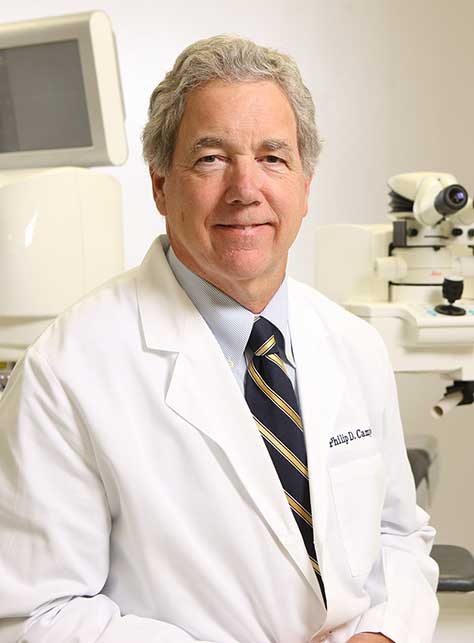 In the course of his medical training, Dr. Philip Campbell has resided in various cities around the country. But, only one place is home: Knoxville, Tennessee. A proud, native Knoxvillian, Dr. Campbell grew up here, continues to live here and is glad to be here for his patients when they need him. “I’ve always had close ties to the people of the community,” says Dr. Campbell. “My LASIK patients are involved in so many interesting lines of work. I’ve treated members of the military, police officers, firefighters, nurses, farmers and CEOs. All have their own unique views on life and I certainly value the trust they have placed in me to make such a dramatic change in their lives. As a surgeon, I get to know them really well; it’s one of the most rewarding aspects of my job.”

Indeed, Dr. Campbell’s Knoxville roots run deep. His father, Dr. J. Ed Campbell, founded the practice that would become known as Drs. Campbell, Cunningham, Taylor & Haun in 1952. Inspired by the elder Campbell’s example, Philip decided to pursue a career in the medical field. After receiving his undergraduate degree from Tulane, he enrolled in Tulane University School of Medicine.

During one of his medical school rotations, Dr. Campbell met Ocular Pathologist Dr. David Apple, who became a strong influence along with another professor, Dr. Thom Zimmerman. It was then that Dr. Campbell decided to pursue a career in Ophthalmology, eventually completing his internship and residency in Ophthalmology at Emory University in Atlanta. There, he was fortunate to study under George O. Waring, III, a pioneer in refractive surgery.

Thanks to those early mentors, Dr. Campbell gained a strong foundation in Ophthalmology. Those doctors also instilled in him the importance of staying at the forefront of technology—a lesson that was imparted early on by his father, Dr. J. Ed Campbell, who is the first surgeon to perform corneal transplant in East Tennessee. Upon completion of his studies, Dr. Campbell joined his father with Campbell, Patterson & McCoy (and today named Drs. Campbell, Cunningham, Taylor & Haun), which recently celebrated 60th anniversary as a Knoxville institution.

The strong drive to embrace emerging technologies led Dr. Campbell, along with his partner Dr. Les Cunningham, to introduce the LASIK vision correction procedure to Knoxville. As this new procedure’s success and popularity quickly grew, it became clear to Drs. Campbell and Cunningham that a facility dedicated to laser vision correction was needed in East Tennessee. So, in 1997, the two surgeons founded the area’s first practice-based onsite LASIK surgical facility, the Campbell Cunningham Laser Center. “It’s truly exceptional and built to facilitate the most advanced laser procedures,” says Dr. Campbell. “These state-of-the-art facilities combined with our exceptional staff makes this the premier on-site laser center in all of East Tennessee.”

Dr. Campbell is enthusiastic about the many new possibilities in eye surgery. “I believe we’re practicing medicine and performing surgeries in ‘the Golden Era of Ophthalmology’,” he says. “New advancements in technology, techniques and treatment options have made this an exciting time in eye care. This evolution that’s going on in modern eye surgery has made our work particularly rewarding,” Campbell goes on to say.

“The great results we are able to achieve are nothing short of thrilling for our patients,” Campbell added. “Performing life-transforming surgery is so gratifying for us and our patients appear appreciative.”

“Refractive surgery resembles a family practice, a surgical practice and a well-medicine practice all in one,” Dr. Campbell says. “The patients are relaxed, upbeat and in good spirits. The most rewarding part is observing patient reactions and their improved personal lifestyle.”

When he’s not at the office, Dr. Campbell is usually with his family enjoying what most East Tennesseans like. On weekends, might find him in the outdoors enjoying activities like boating, fishing, hiking and traveling. But beware, Dr. Campbell is also an avid tennis player.

Whether he’s performing the latest in refractive surgery or sweating on the tennis court, you can be assured that Dr. Philip Campbell stays true to his Knoxville upbringing, honoring a homegrown tradition.