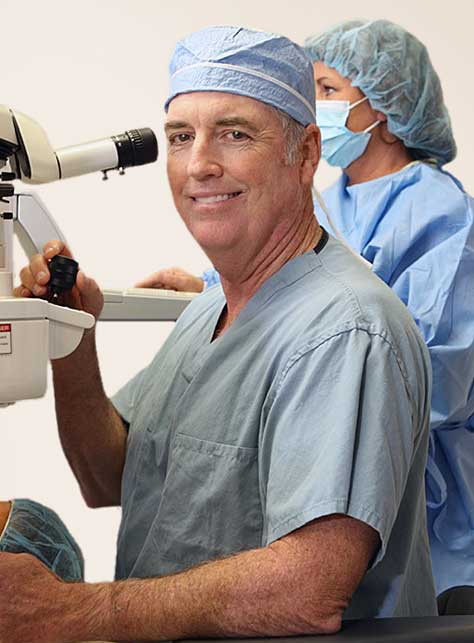 “It’s been such a privilege and pleasure to help so many people achieve freedom from their glasses and contact lenses.”

When Les Cunningham entered medical school in 1978, he had no real idea of what specialty he might pursue. After enjoying his pediatric rotations, he chose that as a career. But, while practicing in Florida, he “realized pretty quickly that specialty wasn’t the right fit for me.” Dr. Cunningham continues “what I really wanted was something that would combine primary care with surgery and advanced technologies.”

That desire led Dr. Cunningham to Ophthalmology and, once there, he knew he had made the right choice.

It was 1991 when Dr. Cunningham joined the Knoxville Ophthalmology practice that was initially founded by Dr. J. Ed Campbell in 1952. He couldn’t have landed in a better place. The practice was known for combining the best in personal care of their East Tennessee patients while always staying at the forefront of advancing technologies. Similar to Dr. Cunningham, Dr. Philip Campbell had a strong interest in Refractive Surgery and after several years, the result was the founding of the Campbell Cunningham Laser Center.

“Back in the 1980s, Radial Keratotomy (RK) technology was getting better,” recalls Dr. Cunningham. “I performed my first RK in 1992. The technology didn’t correct a wide range of refractive conditions, but it was an excellent procedure for the time and we still have many happy RK patients today.

“We began using the Excimer laser in 1996 for a procedure commonly known as PRK,” Cunningham goes on to say. “But recovery times were longer than we have today. Soon, the recovery time was shortened by the introduction of LASIK, which combined making a corneal flap while incorporating the new Excimer laser for the treatment and it was amazing.”

LASIK is safer, more predictable, more consistent and, of course, patients love the fast recovery. “Dr. Campbell and I were early and enthusiastic proponents of the new procedure”.

But bringing LASIK to East Tennessee initially presented a few obstacles. To begin with, there was a tremendous amount of expense with the investment in property, equipment, talent, technology, etc. “We kept asking ourselves, ‘if we build it, will they come?’” says Cunningham. “On top of that, we didn’t have a clear-cut plan on how to let patients know about this new procedure. Fortunately, we already had a busy practice and we had a strong name recognition as one of the leading practices in the market. It didn’t take long for patients to realize that we were bringing LASIK to East Tennessee and it has certainly been a remarkable sixteen years.”

“I believe LASIK® is a fantastic procedure with amazing results”

Drs. Campbell and Cunningham quickly saw the need for a facility exclusively devoted to refractive surgery on site. They realized that by having a dedicated in-house laser surgical facility, specially staffed and operated in the same building as their Ophthalmology practice, both doctors could provide the convenience and continuity that would now benefit their LASIK patients as well. In 1997, the doctors co-founded the Campbell Cunningham Laser Center, East Tennessee’s first onsite surgical facility dedicated to LASIK.

“Performing LASIK on a variety of persons in all walks of life is incredibly rewarding,” says Dr. Cunningham. “It’s always a thrill to see patients on their next day follow-up after surgery. Some are in tears because they’re so happy they’ll no longer be burdened with glasses or contacts. We have literally changed their lives.”

“Professionally, it’s been great to have had the opportunity to be practicing Ophthalmology in the midst of some of the speediest advances in the history of medicine,” says Dr. Cunningham.  “We’re doing things that were literally unthinkable back when I was in medical school. To start with technology that was really advanced at the time, like RK, and culminate with Custom Blade-Free LASIK…it’s just been a truly rewarding experience. If you would have put me in a time capsule and I would have seen what we were doing today it would have been very, very hard to believe.”

Because he was a part of those major advancements, you might think Dr. Cunningham is expecting more in the near future, but as he says, “I believe LASIK and corneal refractive surgery is close to as good as it can possibly get. The Intralase Femtosecond laser, the blade-free flap, really enhanced our results and the safety of the procedure. Most of the refractive surgical advances today are coming from lens implants both for cataract patients and those patients who might not be candidates for LASIK. The science of LASIK will always see improvements, but right now both the safety of the procedure and the outcomes are just excellent. That’s really all you can ask.”

What has been Dr. Cunningham’s single most satisfying experience with LASIK? “It was a result of a chance meeting with a former undergraduate classmate of mine. His son was a quadriplegic and was having difficulty dealing with glasses and contacts. It was a tough situation for someone who had already been through so much. I can’t tell you how proud I was to be able to help. It gave him a newfound sense of freedom, and it was a great feeling for me to know that I was able to help out in some small way.

We’ve been blessed with wonderful technology and skills, and I try to give my absolute best on each and every patient”.

What lies ahead for Dr. Les Cunningham? “My hope is to one day be able to devote my energies toward providing care to those who don’t have access to ophthalmic treatment. There are 16 million people in the world who are blind due to cataracts. I’d like to make a dent in that number.” Of course, that would be after retirement. Dr. Cunningham still feels like he has a lot left to accomplish right here in East Tennessee.

Disease and Surgery of the Eye